From Family to Motivational Speeches, Coach Krikorian Knows What it Takes to Get the Gold

Meet Adam Krikorian, who has led two US Women’s Water Polo teams to Olympic Gold (2012 and 2016) and even more national titles. In 2017, he was awarded the first ever “Extraordinary Achievement in Olympic Sport” by the Los Angeles Sports Council. While he attended UCLA, he captained the water polo team and during his final year lead the team to the Men’s NCAA championship for the first time in 23 years. When he’s not coaching or prepping for a day of practice, he spends his time in Manhattan Beach with his family or grabbing a bite to eat.

Q: How did you get into waterpolo?

Adam Krikorian: I had two older brothers growing up in Northern California, and we all started as swimmers. My two older brothers went from swimming to playing water polo once they got into high school. They were my role models growing up, I wanted to be just like them. When they chose water polo it was very simple for me, I was going to be a water polo player. My oldest brother went to UCLA and played water polo and that’s what I did. The rest is history.

Q: Who inspires you to continue coaching?

AK: For me, it’s all about the people. I really enjoy relationships and getting to know the people I work with whether it’s the staff or the athletes. They are really the ones who inspire me to continue to coach and bring my best everyday. In that respect, I’m very fortunate that I’m surrounded by quality people. There’s no jerks in our program, everyone is first class and that makes my job so much more enjoyable.

Q: Do you play water polo for fun anymore?

AK: Well, what’s the old line? ‘Do as I say not as I do.’ Our sport requires being in incredible shape. I am not in bad shape, but I’m not in a position to play the sport. If I want my athletes to do the things I expect them to do, the last thing I want is for them to see me do the things that I can’t do. Plus, I’m a little crazy competitive, so sometimes when I get in the water a bit of a dark side comes out, I don’t think it needs to be seen anymore.

Q: Do you have any pregame rituals?

AK: For me personally, I always like quiet time with myself, so I always try to make sure I’m finding time to focus and get my mind in the right place. I think we have our superstitions that alter and change depending on the year and what has gone on in the past. The color polo shirt we’re wearing or the way were sitting on the bench are some of the things we half-jokingly talk about. If we’re wearing a blue polo that’s gotten us a few wins, we’re going to be hard-pressed to change that.

Q: Where is your favorite place to compete?

AK: The best place to compete is anywhere in the States. We travel a ton internationally. We enjoy traveling as a group because it’s the best chance for us as a team to bond and build those relationships that are really important. At the end of the day, I think we would all prefer to play at home in front of our family and friends. Outside of that, and there’s nothing that tops it, playing at the Olympic Games. It doesn’t matter what city or where it is. Taking part and being in that atmosphere and that energy, there is nothing quite like it.

Q: What is it like to coach a team that’s won Olympic Gold Medals?

AK: I think being in that moment in the Olympics is certainly special and exhilarating. When I think back to both the teams that I coached in the Olympic Games and the success we had, I don’t really think about the Olympics themselves. I think about the journey and the lessons we learned…the good times and the growth that we had from the tough times. Those are the things that are more powerful and long lasting than those brief moments in the games.

Q: How do you stay active besides coaching?

AK: My wife has been begging me to do yoga for years. I know I should, but I haven’t gotten there yet. I enjoy running. I would really love to get back into basketball. It’s something I’m passionate about and I haven’t done it for years.

Q: What are some words of encouragement you give your team before they compete?

AK: I think it’s a mistake to think that what you say right before a competition is going to impact your team that strongly, either positively or negatively. What’s more important and what is undervalued are the messages that you consistently spread over the course of the time that you have together. It’s not the one speech that is going to make a difference; it’s the continual message. It’s not a one time thing; it’s what you do every single day.

Get Inspired: A Talk With an Olympic Coach 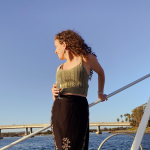