A Tour Through The Celebrity Afterlife

When you think about it, forever is a mighty long time. It is the ultimate amount of time meaning “for- ever”…never ending. There aren’t many things that last forever; it is a physical impossibility. However, there is one thing a human can have that will carry throughout the ages…the legacy one leaves behind.

The Golden Era of Hollywood is a dynasty that surely will never be forgotten. The glitz, glamour, and talent that graced the silver screen during those times were something of a legend—the notion of the “celebrity” was, after all, born during this time. However, this, like all things, came to an end…or did it? With Halloween fast approaching, we have chosen to visit none other than the place where these legends have been laid to rest—The Hollywood Forever Cemetery.

This sixty-acre patch of lush land is a place where the hustle and bustle of the city seems to slow. The sounds and stress seem to stop immediately after passing through the unmistakable gates. My husband is by my side, excited to be part of this expedition. Within minutes we are greeted by a woman adorned in all black holding a black parasol, she looks like someone straight out of a classic silent film. Her name is, ironically, Karie Bible. Karie is the original and only tour guide for the cemetery, guiding tours for over twelve years, she knows every square inch of the grounds and every fact behind the scenes. Then, our tour begins.

As we walk by many original and creative headstones, we notice that peacocks run freely on the grounds. It truly is majestic seeing one rest up close and personal in such a peaceful place. In California, a typical grave is one that is a plaque laid upon the ground, but not in this cemetery. Graves with gardens built within the middle, mausoleums, custom headstones, pyramids, ponds, shrines, benches, personalized cubbies, and even a rocket ship are considered normal and welcome here. It is astounding. I am fascinated by the amount of stories and note-worthy graves that are sprinkled throughout the grounds. Some that stood out to me were: G.J. Griffith, Mickey Rooney, Johnny Ramone, Fay Wray, Rudolph Valentino, Mel Blanc and Mala Nurmi—“Vampira” the original “Elvira”. Don’t know her, check her out—you’re welcome. Who is the most recognizable grave on the grounds? Karie believes it belongs to one only known as “Terry”—you will know her as “Toto” from The Wizard of Oz. Although the tour spans two hours in the blazing heat, we feel like we had only been on it for fifteen minutes when we find ourselves back where we started.

Clearly a cemetery is a place that you come mourn the deceased then leave right? Not Hollywood Forever. They host events. A summer concert series, movie screenings along the Cathedral Mausoleum wall, comedy shows are held in the Masonic Lodge, and arguably the most famous event of the year, their Dia de los Muertos celebration. November 1st is the day known to most as All Saints Day or The Day of the Dead, but is typically overlooked in American culture. Hollywood Forever blows this celebration out of the water. Over 35, 000 people pack behind the cemetery gates, building altars to honor loved ones who have passed. It is a day for celebration, for remembering, and coming together. Dancers and incense welcome the dead and accept the living at the gates upon entering and flowers, color, trinkets, alcohol, you name it adorn the streets all along the grounds. Spectacular shrines are built in both public areas as well as on private graves…it is a sight to see. The most remarkable part, in my eyes, is all of these spectacular altars are not only constructed in one day…but also demolished in the same span of time leaving the cemetery to conduct business as usual the following day.

The Golden Era of Hollywood and the classic legacy of the silver screen triumphantly lives on. If you are looking for history, an unconventional day of fun, or just a way to remember the legacy of Hollywood—come to Hollywood Forever Cemetery. It is the perfect way to make a memorable Halloween, or simply relive the glory days of Hollywood. 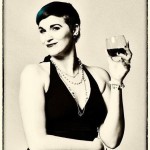 Jessie Setkus is a resident of Southern Orange County and
a graduate of California State University Fullerton. She is a freelance writer with an advertising background with experience in social media, public relations, copywriting and blogging. She also has a passion for non-profit organizations, is a world traveler, a food fanatic and a hedgehog enthusiast.